Argentina is the second largest country in South America behind Brazil, and the third economy of all Latin American nations reaching a GDP (ppp) per capita of almost 15,000 dollars (Index Mundi, 2011). The country covers a territory of almost 2.8 million square meters from a sub-tropical climate by the north to the sub-Antarctic on the south, passing through all the varieties of landscapes and weathers. Its terrain includes the great Andes mountain range, swamps, the plains of the Pampas and a long coastline on the Atlantic Ocean.

Has a population of 42 million, 92% living in urban areas highly concentrated in the Federal Capital Buenos Aires with almost the 20% of the households. Most of the Argentinian are from a European origin (97%) being the 61% white Caucasian. The official language in Spanish and the most widespread religion is the catholic (Index Mundi, 2011).

The country is rich in natural resources, an export oriented agricultural economy with a diversified industrial base, self-sufficient in foodstuffs, power and oil (Startup Overseas, 2010), with a well-educated workforce, being the 23th largest economy of the world (Index Mundi, 2011). However a deep recession foreshadowed economic collapse in 2001 leaving more than the half of the population under the poverty line. The country struggled with record debt default and large currency devaluation. (BBC News, 2012).

By 2003 the recovery was under way, restructured their massive debt, the economy rebounded to grow more than 8.5% annually, taking advantage of their idle industrial and labor capacity, audacious debt restructuring, excellent international financial conditions and expansionary monetary fiscal policies (Index Mundi, 2011). Although this great success, poverty remains significant and unemployment high, many Argentine still await the benefits of the economic upturn (BBC News, 2012).

In the international field, Argentina is considered one of the best points of entry to Mercosur, the regional common market composed of Argentina, Brazil, Paraguay, Uruguay, Chile, Bolivia y Peru, giving access to a market of 226 million people, representing the 40% of all Latin America GDP (Startup Overseas, 2010).

As mentioned, most Argentine are primarily European descent, making them different from other Latin American countries especially concerning to the cultural and emotional behavior. However, they are still a Latin country with extended families still having prominence. The heads of powerful families command widespread respect, but with this comes the responsibility to care for others and to maintain personal and family honor.

Argentinian people are open, warm and direct, and able to remain tactful and diplomatic. Their extrovert character makes them act with passion and sentimentality. In addition they are good communicators and like to have large conversations and maintain little physical distance between speakers (Startup Overseas, 2010).

Argentina is one of the leading madia markets in Latin America, with a strong development of its communication media, mainly because of their historical policy to favor access to cultural assets and services and the extent of the educational system (OSF, 2012). Despite the new emerging digital media platforms, conventional broadcasting and written paper still dominates the news, information and entertainment consumption.

The country has more than 150 daily newspapers, a huge amount of radio stations, dozens of TV stations and one of the highest penetrations of pay-tv in the world, which could be practically considered as the 100% of all the households with TV sets. In the digital arena, by the end of 2011 Argentina had 28 million internet users, reaching almost the 70% of the population, being the second country in the continent behind Brazil in number of surfers (BBC News, 2012).

Entering in the platforms, the leading morning newspapers are concentrated in Buenos Aires, with a national coverage and largely dominated by two brands: Clarín y La Nación, considered the best-selling national dailies by far. Even though the newspaper market has remained stable the last years, it has been affected by digitalization, losing circulation. According to the Open Society Media Program (OSF, 2012), the daily Clarín has loss 19% from 2008 to 2010.

Despite the advance of the new digital medias, TV continues to be the medium of reference, having the most important place as source of news in the country. As it was mentioned, Argentina has a high penetration of pay-tv providing access to a wide range of channels, including foreign ones. However, the major consumption of TV is the free-to-air channels that are distributed by the pay-tv companies.

The third media in importance as source of information are the radio stations, which attract the 48% of consumers, especially old age groups (OSF, 2012). According to the Argentinian Federal Broadcast Committee, in 2008 there were almost 2.000 private stations registered, of which 24% were commercial ones.

If we look at the share advertising spend by medium (AAP, 2012), in 2011 the 40% of all the investment was used in the TV medias, with 34% for free-to-air channels and the rest for pay-tv. If we compare this distribution with the US usage (MPA, 2012) we see that the 51% is destined to TV, the difference is that the investment in pay-tv rises up to 17% percent in the US. The second medias are the written ones with the 35%, led by far by newspapers with the 31% percent. Again, we see some differences with the US, where magazines have a higher weight with more than 18% of participation. Newspapers have only 13%.

Very far from these two medias are radios and outdoor with the 3% and 5% respectively. Finally the digital platforms have a market share of 6% and the greatest growth the last year (2011). In the US Internet has a higher share, more than 9%.

In 2011 for the first time in the history of Argentina, the total investment in medias reached the 1% of the GDP , but far from the US market that spend more than the double (Galbi, 2008). Traditional medias like TV and written have decreased in share the last 5 years from 79% to 75%, however newspaper remains strong with the same 31%. The emerging internet platforms have shown the greatest increase, capturing the 6% of the market (AAP, 2012).

Argentina is considered one of the most creative countries in the world in terms communication. According to the English Gunn Report, that awards the creative excellence in advertising, the country has kept the third global place in 2008 and 2009, reaching the 4th place the last year 2011, behind US, UK and Brazil (Gunn, 2012). In the “creative efficiency” area are number one in the world, which links the advertising quality and the necessary investment to carry it out. For example, Brazil that is number 3 signs up more than 10 times advertising pieces than Argentina in Cannes (Campanario, 2012).

An example of this global creativity was the release of the 200 limited edition of the Chevrolet´s Agile car that emerged from the alliance between General Motors and Google. The agreement of co-marketing with the aim of launching in 2011 a limited edition of the brand with Wi-Fi and access to the entire suite of Google applications. The connectivity was going to be provided by the company Movistar via a 3G Router with wireless Internet service free for one year. This allowed the clients and their guests access the Internet with any Wi-Fi device from the vehicle or nearby (Go Auto, 2011).

In 2010 the brand sold more than 12.000 units, the next challenge was to create a new campaign that could give the model a more exceptional character and continue building its emotional attributes, keys for the target market, transmitting youth, modernity, prestige and innovation. To find the clues of the campaign they saw the young people, what do they need in this days? The answer was to be connected all the time! That was the beginning of the message: “Yes, a car with Wi-Fi”

And how did they tell it? They figured a trip in the car sharing the adventure with a friend and a great music theme. The point was that the friend was connected with the Wi-Fi and visible through a notebook. It was a brilliant way to get the awareness of people, merging the attributes of the brand with a sophisticated humor (Effie Awards, 2011).

For the communication campaign they included multiple points of contact with customers like Television and YouTube showing the commercials, a stand in the vocational resort Pinamar, newspapers showing some technical approaches and playing with the public’s surprise and radio simulating a call center answering silly questions about the car and the Wi-Fi service. They traveled all the country showing the car and dressed the dealers with the brand and Google.

The results was more than they expected; the limited edition was sold in less than a month, the 68% of the people asked told that the spot added prestige to the brand, the innovation, vehicle prestige, youth and happiness transmitted from the model in some cases doubled the detected before the campaign (Effie Awards, 2011).

Another interesting campaign was developed by BBDO Argentina for the car Smart and used tweets as animation frames to show in their Twitter page a cute smart car traveling through the city as people watched it in a bustling street. The car passed many other ones and lots of building before parking in a small place. Each frame of animation was made out of the 140 characters permitted on Twitter.

The principal idea was to transmit that the car Smart fits in everywhere, even in 140 characters. The final message was: “Smart, a great idea for the city. Open your mind”. Pure creativity! You can see the video here: http://www.youtube.com/watch?v=q-Ftn2qsIQQ 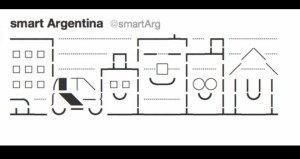 Startup Overseas (2010). Expanding a business in Argentina. Retrieved on August 11, 2012 from http://www.startupoverseas.co.uk/starting-a-business-in-argentina/marketing-a-business.html